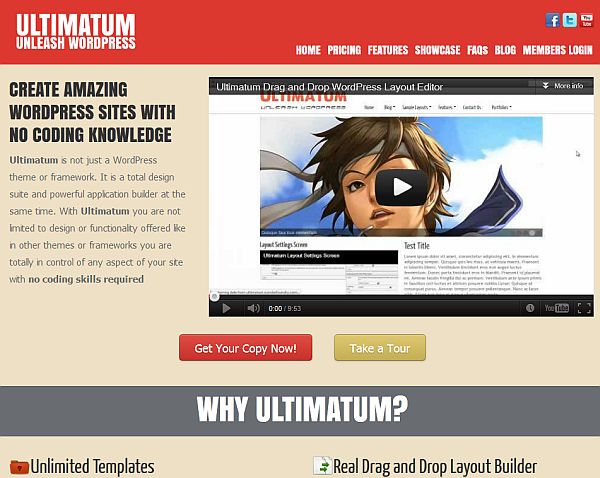 A theme with a responsive design will adapt the presentation of the web page to the screen of the device used by the visitor; be it a desktop, a laptop, a tablet or a smartphone. Hence, such a theme responds to the size and orientation of the screen.

The General Settings box includes options for logo, favicon, header and footer scripts, WooCommerce Integration, and a drop-down menu to select your preferred theme for the Pretty Photo feature – you can choose from six options.

The SEO Options page is a recent addition and is disabled upon install. When you prefer to use Ultimatum’s SEO settings above installing a third-party plugin, you can enable these on this page.

The SEO Options give you the means to tweak the Search Engine Optimization settings according to your taste. This page serves sections for:

The Font Library page of the Ultimatum Theme, lets you can choose from 49 Cufon fonts, 49 Font-Face Fonts and the entire Google Font Library which currently covers 262 fonts. The Font Library gives you an easy interface for managing your preferred fonts. While doing so, the font previews will come in handy.

Ultimatum Templates are groups of page layouts which – in case of the Developer’s and Designer’s license – you can not only import, but also export.

A template can have as many layouts as you want. You can assign a specific layout to posts as well as to pages while creating or editing a post or a page.

Layouts are created with the Layout Generator which is accessible through the Layouts button at the Available Templates section of the Templates page.

Partial layouts are in fact building blocks – widgetized areas – which you create, use and reuse within full layouts. You can think of headers, footers, and widgets areas before and after the main content.

Full Layouts are recognized by your visitors as page layouts. These can be cloned; you can copy an existing layout so that you do not have to create a new layout from scratch. And you avoid altering an existing layout by mistake.

The default layout shows initially a completely blank canvas at the front end. In order to change this you turn to the Layout Generator. You need to:

Opening the CSS Editor is a matter of clicking a CSS button within the Layout Creator/Editor. When you do, a pop-up appears. However, you will not see any CSS code! What you will see are merely relevant toggle boxes.

These CSS toggle boxes give you the ability to make changes to the CSS code of elements by pointing and clicking – without coding. The Ultimatum Theme facilitates the 960 grid system for its Cascading Style Sheets.

Outside the Ultimatum panel, the theme framework adds a module for Slide Shows and one for Forms. The Slide Shows module lets you create galleries with one or more images.

The Forms Creator allows you to create contact forms – for example – by dragging and dropping form elements like Text Areas, Text Boxes, Drop Down Menus, Check Boxes, and Radio Buttons. When you drag a form element into the From Fields area, a dialog box will appear where you can enter the necessary values.

Let’s follow the steps you need to take when you want to build a new layout with the Ultimatum Theme.

A basic blog page layout could include three rows:

When you create a new row with Ultimatum’s Layout Creator/Editor, you can choose from 28 styles. Each style divides the available width over a certain number of columns; ranging from a one 100% width column up to four 25% width columns and about any possible combination in between.

For our simple blog page we create a Layout Body with:

In addition, each column has its own Column CSS. Editing the CSS code of any parts of the grid is a matter of:

In order to add content to your layout, you can drop your desired widgets into the preferred parts of the grid. You can do that at any time. Before, while or after tweaking the CSS code.

As mentioned earlier, the Ultimatum Theme comes in three flavors:

The Starter License gives you a lifetime membership and support for one site.

The Developer’s License entitles you to support for an unlimited number of sites, WordPress multisite support, and the ability to export templates.

The Designer’s License adds the right to sell your templates to the Ultimatum Template Market. More details on the pricing plans are available here.

At the moment, the Ultimatum Developer License is available at Mighty Deals for only $57, and the Start License for only $37. Definitely worth the money in my opinion.

Disclosure: This post may contain affiliate links. When you follow an affiliate link and purchase an item on the website regarding, Wilwebs may receive a compensation -- but rest assured, not at your expense ;-) .