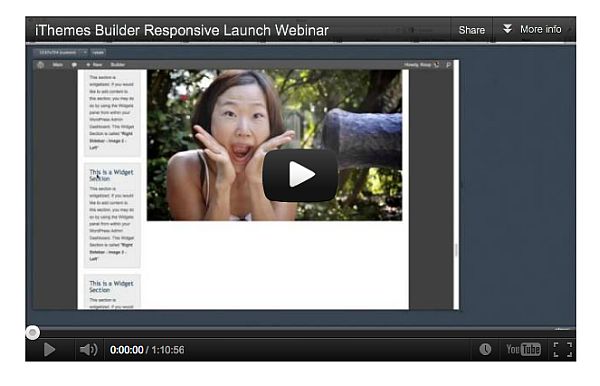 Last week Thursday, iThemes released version 4.0 of its Builder Framework. Builder 4.0 is a major update of the framework since it delivers responsive support to Builder Core as well as to its child themes.

When the post iThemes Builder WordPress Theme Framework – A First Look was published about two weeks back, the developers at iThemes were still working on the responsiveness of the Builder framework.

Since deadlines of software projects are sometimes harder to meet than expected, it did not make sense postponing the publication of the Builder review until the actual release of the responsive version. However, the guys at iThemes did a great job; a responsive version of Builder is now reality.

Of course, I have downloaded Builder 4.0 as soon as it was possible. Over the weekend, I have been playing around with Builder 4.0. And today, I can confirm that everything written about Builder in the First Look still stands – fortunately, I might add.

When you update an existing Builder site to version 4.0, the responsive features of the framework are disabled by default. This will ensure you that when you upgrade, the appearance of the site will remain as it was prior to the upgrade. This also implies that there is really no need to wait before upgrading to Builder 4.0.

Although making an existing Builder child theme responsive is quite simple – it is basically a matter of adding one line of code – there is a possibility that the styling of the child theme is not responsive proof yet.

Especially when you are using the Style Manger it is advised to wait a bit before activating the responsive features of Builder 4.0. A responsive ready Style Manager is still under development, but updates are expected soon.

There is a possibility that some child themes cannot be upgraded to a responsive design. iThemes is currently in the process of checking every single Builder child theme and will illuminate this shortly.

When you are working with a Builder child without any customization, it is best to wait until the responsive version of that child theme becomes available. In case patience is not your biggest virtue, you can simply give is a try.

Adding the following line of PHP – directly after the <?php tag – to the functions.php file of your Builder child theme, will activate the responsive features of Builder 4.0:

That is it. When you notice any strange behavior of the site’s styling, remove that single line, and you are back to a non-responsive site design. Of course, it is best to test this on a localhost, and always make a backup prior to upgrading – better safe than sorry.

When you have ever considered trying iThemes Builder, now is the time. Until October 31, you can get a 50% discount on the Builder Developer Pack by applying the coupon code RESPONSIVE50.

Even existing customers of Builder, can take advantage of this promotion; the purchase will automatically extend the active Builder subscription with another year from the current  expiration date.

Disclosure: This post may contain affiliate links. When you follow an affiliate link and purchase an item on the website regarding, Wilwebs may receive a compensation -- but rest assured, not at your expense ;-) .